We hear about “fake news” and wonder why TF it’s getting around the internet so much!

Did that celebrity really die?

And most of all, what makes it so “viral?”

Well, we finally have some idea.

Researchers at MIT published their study called: The spread of true and false news online

And here are some of the fascinating findings!

What fake news the researchers studied

The researchers chose Twitter because it’s the easiest to see and measure the sharing of news. For example, you don’t need to be “friends” with someone to see what they share, like you do in Facebook. Plus, Facebook’s algorithms control more of what users see, compared with Twitter.

The researchers determined what was verifiably true or false by cross-referencing information with credible fact-checking websites like Snopes, Politifact, and FactCheck.org.

Fake news spreads faster, farther, deeper, and more broadly than the truth! Want to know why? Researchers at MIT have an idea. #fakenews Click To Tweet

Personally, I’m not sure this surprised me very much. How about you?

What I found super-interesting was who was spreading the fake news and why.

It must be the bots… Right?

On initial reaction, we may want to blame the bots for this right? Automatic “retweeters” that don’t have much of a conscious brain to determine fake vs real.

But this was wrong!

The bots were found to spread the fake and true news stories at the same rate.

It must be a few people with huge followings… Right?

The second thought is whether the fake news traveled farther, faster, and deeper because of a handful of people with huge Twitter followings.

Researchers found that “people who spread false news had significantly fewer followers, were less often verified, and were less active on Twitter.”

This means that it’s the regular people with unverified smallish accounts who spread fake news to more people than large Twitter accounts did.

I guess there is evidence of “strength in numbers.”

Why fake news spreads faster and farther than the truth

It must be the type of info… Right?

The researchers didn’t just look at the “facts” of the tweets that spread, they also looked at things like novelty and emotional reactions too.

They found that the false news was novel than the truth.

It must be our emotional reactions… Right?

They also found that the false stories inspired different emotions than the truth.

Perhaps it’s these emotional triggers that are key for “going viral.”

Whereas the emotions inspired by the not-so-widely shared truth included:

The feelings of fear, disgust, and surprise are better at spreading fake news than the feelings of anticipation, sadness, joy, and trust in the truth. #fakenews #feelings #truth Click To Tweet

Since bots spread both fake and true news equally, the spread of fake news was because of our impulse to hit that “share” button. And this reaction may very well be because of the emotional triggers that we feel, that bots don’t.

As I mentioned in my blog post about how to spot fake health news, we’re awash in BS!

According to Vox’s story about this study:

It’s a huge analysis that brings data to bear on the suspicion many have that social media, as a platform for news, has a bias for the sensational, unverified, emotional, and false. And it’s concerning, considering how social media has become a dominant force for news distribution.

So, it looks like human emotion is a huge factor when it comes to the spread of news.

What can we do?

First of all, hold the impulse of hitting that “share” button too quickly.

You’ve never shared something based on the headline alone… Right?

Third, you can follow me on Twitter for news about health research and blogging (I promise to take my own advice here and spread the truth farther than the #fakenews!)

Fake news spreads farther, faster, and deeper than the truth. It’s not the bots – it’s people like you and me who don’t have massive followings, but who love novelty and have feelings. And the feelings of fear, disgust, and surprise are better at spreading fake news than the feelings of anticipation, sadness, joy, and trust.

Signing off and toasting: To being a better spreader of the truth!

Were you surprised that fake news spread farther, faster, and deeper than the truth? Were you surprised it’s not the bots or those few people with massive followings? Are you going to check your immediate emotional reactions to a post before sharing like I am from now on? I’d love to know (in the comments below)!

Is keto good for athletes?

How Stress Hormones Keep You From Your Weight Loss Goals

I help health and wellness professionals build their authority with scientific health content. They want to stand out in the crowded, often unqualified, market of entrepreneurs. I help them establish trust with their audiences, add credibility to their services, and save them a ton of time so they don’t have to do the research or writing themselves. To work with me, click here. 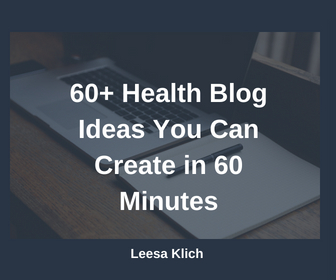 Are your readers hearing crickets?

Detailed suggestions for fast results,
straight to your inbox!

EXPERT TIPS TO OPTIMIZE YOUR BLOG: